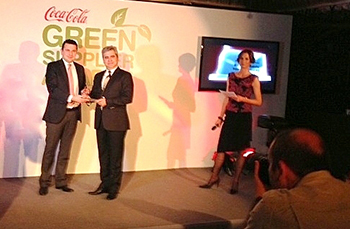 Elif’s sustainability approach is recognised by Coca-Cola’s prestigious Green Supplier Award with its Energy NOsume Project. The award, given for the first time, is an important performance indicator of Elif’s approach to sustainability.

The Coca-Cola Green Supplier Award, given for the first time this year to the best sustainability practices of Coca-Cola suppliers in Turkey, Caucasus & Central Asia Regions, aims to accomplish a larger scale implementation of the economically feasible and responsible benchmark projects that substantially contribute to the environment.

Elif continues to put into practice new systems, technologies and practices of different scales under the roof of NOsume Energy Project in order to minimise energy consumption. World’s first ever large-scaled heat recovery project was also implemented by Elif in 2012 with the exact same purpose. With the successful accomplishment of this new heat recovery project, Elif started to recover the heat rejected by the compressors used in its global benchmark production facility in Istanbul and then reuse this energy in the production cycle again. This venture was the first ever large-scaled heat recovery project achieved not only in Turkey, but also throughout the World.

The new system provides reduction in the total energy consumption of the production facility by recovering the heat rejected by the compressors and reusing this energy in the production cycle again. As an outcome of the project, all economic factors considered, Elif deactivated one of the existing hot water boiler systems resulting in the shortening of the return time of capital investment made for this project under 1 year. According to the first-year results of the project, the newly implemented system provided a 30% energy saving from March 2012 to March 2013 compared to the previous year. With this pioneering and benchmark project, Elif reduced CO2 emissions by 330 tons per year. According to these results, each year, Elif contributes equal to the benefit provided by planting 10,000 trees in the campaign against global climate change.

The Coca-Cola Green Supplier Award is the best performance indicator of this global benchmark project as an initiative for sustainable practices that will inspire other industrial entities to engage in similar projects resulting in a continuously growing environmental benefit for our planet. The successful system is now being used by many companies in various scales all around the world. Elif is proud of pioneering such a successful system on a global platform. Developing its business activities in order to promote productive, sustainable and cost saving methods and technologies, Elif stands out with the value it creates for the environment and the society as well as with its commitment to sustainable development. Sustainable practices are an integral part of Elif’s corporate culture and, therefore, Elif, in cooperation with its customers and suppliers, will continue to invest in new initiatives and projects in the field of sustainable development.