Elif helps protect the planet with its 800 co-workers 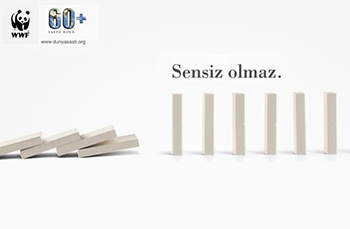 Elif turned its lights off on Saturday March 23rd at 8:30pm-9:30pm for the Earth Hour, the world’s largest environmental movement, together with millions of people around the world. Elif also called its suppliers, co-workers, customers and all other parties to take place in the symbolic event, aiming to increase the awareness of environmental issues and mobilise people to take action on climate change.

Earth Hour is a global event organised by the World Wildlife Fund. The inaugural Earth Hour, a symbolic action of switching off lights for an hour, was held in Sydney Australia for the very first time in 2007. Since then, Earth Hour has become the world’s largest public environmental action with hundreds of millions of people and business participants from 7,000 cities and towns in 150 countries and territories in seven continents. The symbolic event, aiming to draw awareness to climate change, is held annually on the last Saturday of March each year. Earth Hour 2013 was held on Saturday March 23rd at 8:30pm-9:30pm. During Earth Hour, non-essential lighting in Elif’s global headquarters were turned off for one hour to draw attention to environmental concerns.

As an Earth Hour participant, Elif once more demonstrates its collective concern for the sustainable future of the planet as being an integral part of its corporate culture. Elif, one of the leading companies in the flexible packaging sector, showed its sensitivity towards environmental issues and climate change, and achieved to be one of the few companies highlighting the mass environmental movement in the packaging sector. With an undimmed determination to take action on climate change, Elif encourages and inspires all co-workers, customers, suppliers, industry partners, stakeholders and communities to show their commitment to a sustainable future by keeping their lights off during the Earth Hour.