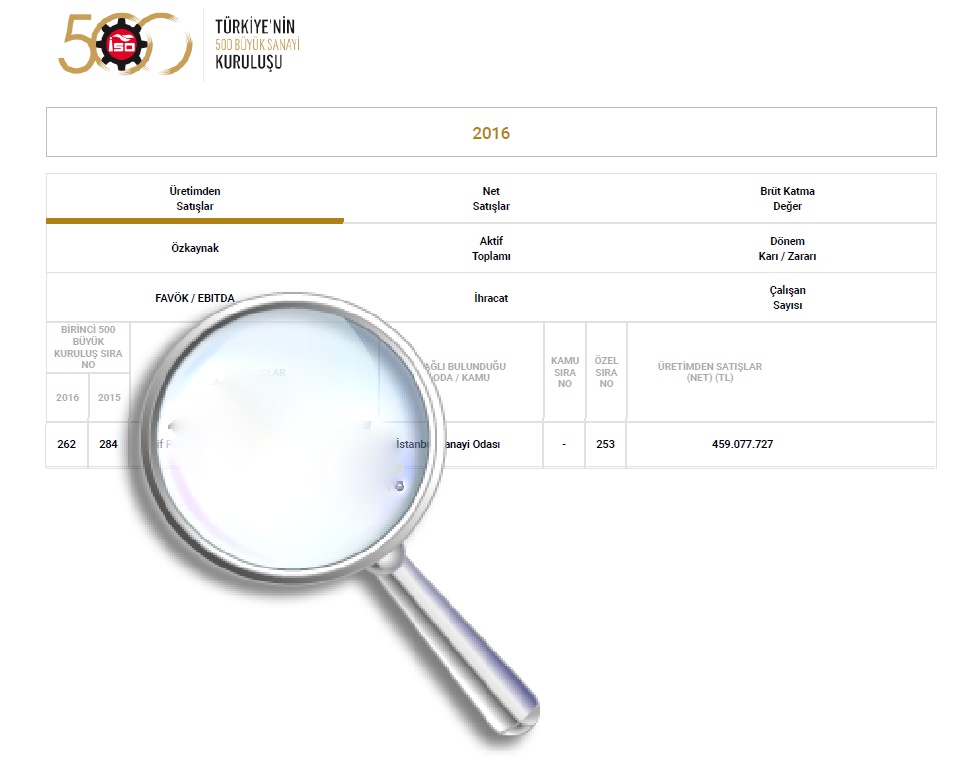 Elif, which has demonstrated the biggest raise in its sector in the recent years in the Turkey's First 500 Top Industrial Organisations (ISO Top 500 Companies) announced by the ISO - Istanbul Chamber of Industry, continues to reach the summit by climbing 22 steps at once also in 2016!

Elif’s leadership in the flexible packaging market is awarded and recognised many times by the multinational leading brands and institutions to which Elif offers services, and it ranked as the 262nd, climbing 22 steps at once, in the "Turkey's Top 500 Great Industrial Entity - 2016" report which is the research that has been performed by the Istanbul Chamber of Industry (ISO) for 49 years, which is hotly-anticipated each year, involving the most important industrial organisations of Turkey.

As a result of developing more efficient, more creative and more innovative solutions in line with its sustainable growth targets, strategical configuration of new investments in this context, the state-of-the-art technology and technique and the innovations made, Elif’s name is frequently mentioned as an organisation steadily ascending in this giants’ list each year and it is continuing to climb to the top with self-confident steps.

Launched as the Top 100 Industrial Enterprises in 1968, and sustained and improved each year, the Turkey's Top 500 Industrial Organisations List, which is qualified to be a powerful mirror that reflects Turkey's economy, is determined by referring to the comments of expert academicians and by making various evaluations on financial ratios, resource structure, profitability ratios, economic profitability, asset turnover rates, factor income (functional) distribution of its net added value, non-production incomes, employment and gross added value distribution and labour productivity.

Elif has assisted its customers and nations to which it offers services with top quality products and services that are provided with the notion of “Package for Life” and with the synergy and dynamism created by its customers, business partners, professional human resources and their understanding of innovative management. Elif will continue to rise by taking its name further up each year in the giants’ list by fulfilling their targets also in the future and creating a path to where they want to be tomorrow from the point they are situated today.